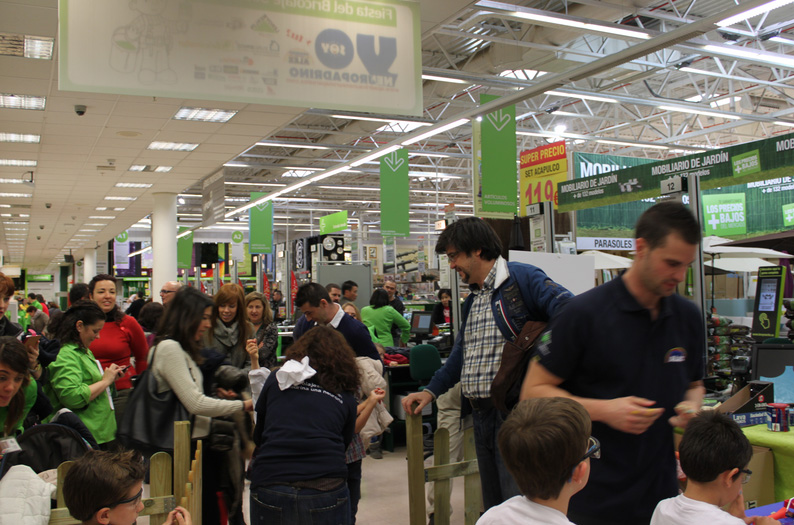 More than 150 people moved past 29 March to the store of Leroy Merlin in Leganés (Madrid) to participate in the solidarity workshop of DIY that was organized as part of the #bricolajesolidario initiative:sponsor a neuron. A campaign promoted by the Foundation Txena Elorza, under the coordination of Briconatur, and has assisted with the exhibition Eurobrico and Leroy Merlin chain.

The objective of this initiative is the implementation of educational DIY workshops enabling to disseminate among society as a whole the DIY activity, but contribute to the uptake of funds for the treatment of Alex.

Alex is a six-year-old boy suffering after birth premature cerebral palsy, with only 30 weeks of gestation, and who suffer intellectual disability, Visual and auditory.

After three long years of waiting, She was called a neural rehabilitation in Santiago de Compostela clinic to start an experimental treatment, consisting of the creation of neurons using growth hormone and melatonin. A treatment that will allow Alex in the future be able to handle a computer to communicate and even work; and, In short, have the opportunity to be an independent person, from its limitations.

The organizers and partners of the campaign, together with leading companies in the sector of DIY and hardware, they have already taken the initiative to acquire neurons worth one euro to finance the treatment. And the same is being promoted from the solidary workshops, so that participants can contribute to the improvement of Alex.

Initiative also next month of October will be moved up to the Edition 2014 of Eurobrico, that will open its doors at the Feria Valencia of the 1 to 3 October..