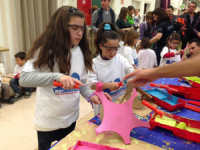 The charity project"Sponsor a neuron for Alex”, promoted by the Foundation Txema Elorza and Leroy Merlin, and in which collaborate actively Briconatur and Eurobrico, It will be present in the Valencian DIY fair, held between the 1 and the 3 next October, with the celebration of a "workshop for children" which will feature fifty schoolchildren between 3 and 12 years.

The workshop, similar to previously celebrated in the Leroy Merlin in Leganés, It will allow the participating children interact with Briconatur monitors and use of tools and materials that will start them in the practice of DIY, making it compatible with the spirit of solidarity of the initiative.

For the realization of the workshop, Besides the collaboration of institutions most cited above, There are the following firms sector providers: Barbosa, Bosch, Bruguer, Eagle, Optimant Controls, REI, Salki, Snickers Workwear, StanleyBlack&Decker, WD-40 , Wolfcrafft and Worx.

Who is Alex
Alex is a six year old child, cheerful and smiling. He was born premature with just 30 weeks of gestation and suffered a stroke causing her scarring in the brain. Its diagnosis is infantile cerebral palsy that causes intellectual disabilities, Visual and auditory. After three long years of waiting, He was called a neural rehabilitation clinic in to start an experimental treatment.

The treatment consists of creating new neurons by growth hormone and melatonin, to enable these new neurons to perform functions that are damaged. This treatment will be based on medication and intensive physiotherapy sessions, speech therapy, visual and auditory stimulation. With everything, is to develop the fine motor skills so that in the future you can manage a computer to communicate and even work. In short, It's "free" Alex capabilities so you can have the opportunity to be an independent person, from its limitations..