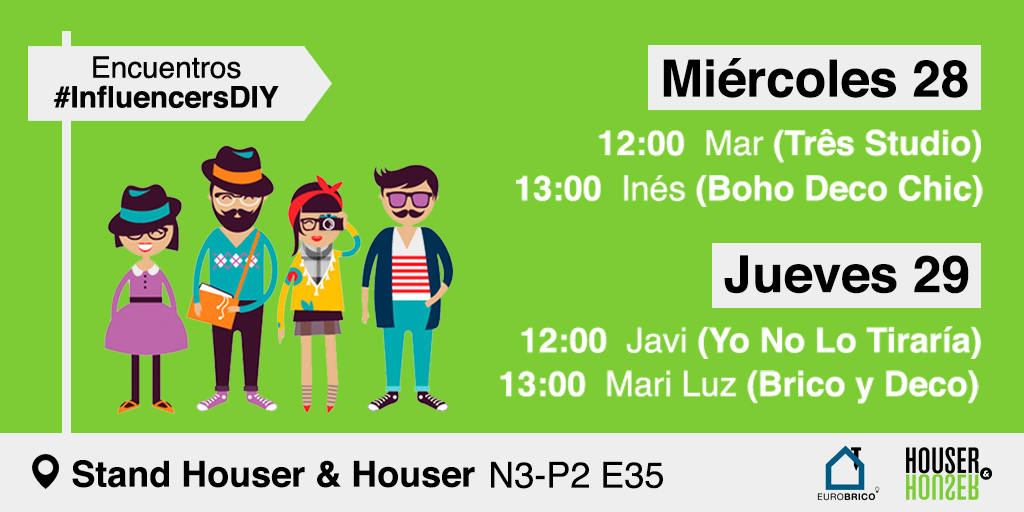 Among the novelties of this year Eurobrico presents the possibility for visitors to talk to four sector Influencers, to know of first hand this new form of promotion and know if working with them would be a good option

In the fair international of the DIY not could miss the characters of fashion, This people who through their blogs, videos and social networks spread the virtues, tricks and tips from this sector. They are the Influencers, no doubt an of the new professions of those times that run.

A major hole has been made in the DIY sector, because their videos and tutorials on the best way of restore a furniture or redecorate the bathroom are seen every day by more followers. And for those brands, each time it has more impact that its product is used (or competition) in their projects.

Houser & Houser firmly believes in the style of marketing that you can do with them, closely related to independence and quality, and by this has invited to four to its stand of Eurobrico, so can find is with them marks and is strengthen the synergies between them, most likely beneficial to the entire sector.

Sea of three Studio e Inés of Boho Deco Chic will give his vision more close to the decoration and Javi of I not it would pull and Mari light of Brico and Deco will be for those that want to talk about the DIY more authentic. All of them expect brands interested in the Influencers at the stand of Houser & Houser.

About Houser & Houser an agency of marketing digital specialized in the DIY.